Install and Enable OpenSSH on CentOS 7

Secure Shell (SSH) is a cryptographic protocol that allows a client to interact with a remote server in a secure environment.

Learn how to enable SSH on CentOS 7 by following the instructions in this short tutorial.

Installing and Enabling OpenSSH on CentOS 7

SSH software packages are included on CentOS by default. However, if these packages are not present on your system, easily install them by completing Step 1, outlined below.

Enter the following command from your terminal to start the installation process:

This command installs both the OpenSSH client applications, as well as the OpenSSH server daemon, sshd.

In this example, the system informs us that the latest version is already present.

To start the SSH daemon on the OpenSSH server:

When active, sshd continuously listens for client connections from any of the client tools. When a connection request occurs, sshd sets up the correct connection.

Check the status of the SSH daemon:

As we have previously started the service, the output confirms that it is active.

To stop the SSH daemon enter:

We can check if the service has stopped by verifying the status. The output shows that the service is inactive and the time and date when the status last changed.

Enable SSH to start automatically after each system reboot by using the systemctl command:

To disable SSH after reboot enter:

Once you access the file by using a text editor (in this example we used vim), you can disable root logins and edit the default port number: 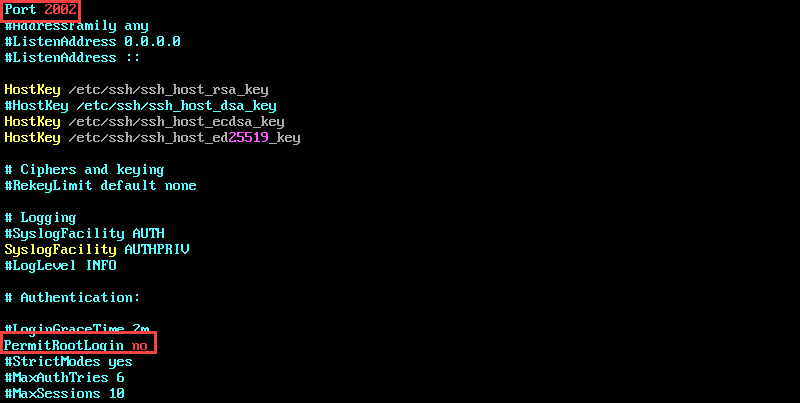 Remember to uncomment the lines that you edit by removing the hashtag.

Save and close the file. Restart sshd:
service sshd restart

After successfully enabling SSH and configuring the sshd file, adjust the firewall settings to make sure there are no compatibility issues.

It is also possible to restrict IP access to make the connection even more secure.

To restrict IP access, edit the iptables file by typing:

To allow access using the port defined in the sshd config file, add the following line to the iptables file:

If your site uses IPv6, and you are editing ip6tables, use the line:

Save and exit the file by pressing Escape (Esc) on your keyboard and typing:

In this tutorial, we learned how to enable SSH on a CentOS 7 server. Additionally, we configured your firewall and SSH rules to limit access.

Your CentOS 7 server is now able to accept SSH connections.